Evoking Memories Through the Power of Food 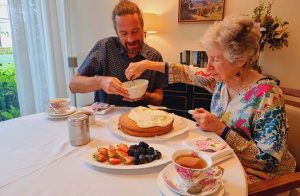 Food is more than nourishment – it has the power to fuel the mind and body, expresses cultural diversity and most of all, bring people together. As a therapy to help combat dementia, cooking can also trigger memories through taste, smell, touch, sight and sound. At Cranbrook Care’s Bayswater Gardens, residents Mina, Gae and Christine have been cooking up a storm while taking a trip down memory lane.

Grandmothers seem to possess a natural gift when it comes to cooking, with their recipes often handed down to be enjoyed by future generations to come. Mina, Gae and Christine – three inner west grandmothers – have agreed to share their special recipes, which have either been passed down by family members, or are now being shared to begin a new tradition for generations to come.

Italian born Mina’s delicious Italian Lasagne is legendary – made even better by the pasta that Mina used to make by hand. Mina’s daughter, Claudia Rinaldi, sourced the recipe from an old book written in her mother’s native tongue. “I covet Mum’s old recipe books – especially the Italian ones – they evoke such amazing memories for the whole family,” said Claudia. “I hope that future generations will enjoy this same delicious meal for years to come.”

Gae’s sponge cake recipe, Oma’s Sponge, was also handed down from family members and has become a tradition in the Frecklington household. Gae’s son Adrian says that his grandmother’s traditional sponge cake was often whipped up in minutes with no recipe, and was so delicious that it often won prizes at local shows.

The aromatic slow-cooked beef, bean and mushroom dish, Pepper Pot, is a favourite of Christine’s children. Christine loved to entertain, with the dish often served to guests at gatherings. Legend has it that the dish is actually not as peppery as the name suggests – just tasty!

Cranbrook Care values the importance of tradition, togetherness and cultural connection among residents and their families. Cooking holds great sentimental value to many of the Bayswater Gardens residents, with getting into the kitchen providing the added bonus of helping to maintain mental and physical well-being.

Older Australians can benefit from cooking through sensory therapy, which has been widely recognised with helping to treat conditions such as dementia. Stimulating the sense of taste and smell with particular types of food may spark pleasant memories and emotions, triggering nostalgic recollections of a time gone by.

The sense of taste has the strongest of associative memories that someone can make. Food memories are more sensory than other memories in that they involve all five senses – sight, taste, smell, touch and sound, which offers the potential to layer the richness of a food -associated memory[1].

Grandmas around the world have served as sources of never-ending culinary knowledge, using their skills and family recipes to bring joy to others. The memories that come from meals enjoyed with friends and family can be just as sentimental as the meal itself!

Bayswater Gardens is part of the Cranbrook Care family.
Discover our other locations.